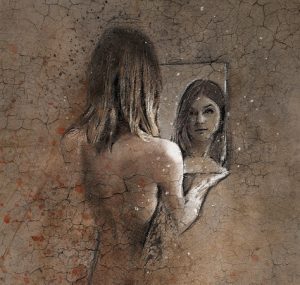 Last weekend we had one of our male friends round for the evening for a small bonfire.  As usual my husband was keen to document the occasion with an Instagram story. After his phone had panned around the scene of us sat by the fire I warned him, “You best not post that if my face looks too big!” Laughter erupted from the pair of them. “What?!” our friend said incredulously. “Seriously I have a moon face!” I exclaimed.

As daft as it sounds, I’ve always been self-conscious of how round my face looks in photos. For someone who has been called a stick insect more times than I care to remember, I have a surprisingly chubby face. It’s a perfect circle with more cheek than cheekbone. If I take a selfie with a friend it always seems to look so huge at the side of theirs!

This was the conclusion my lovely pal came to. Great, so now I’ve got a big face and I’m stupid I too!

Unfortunately I can’t remember word for word what my friend said next, but it went something like this…

Why do girls obsess over the most minor details and silliest things like my ‘face is too big’ or ‘my lips are too small’? Nobody cares. Nobody would ever think that or notice that about you until you pointed it out them. They wouldn’t think twice. It’s ridiculous.

Why do we do that? Also, why are we so quick to call out these so called flaws in front of others?

I think in some ways it’s a defense mechanism. It’s likes saying you don’t need to pull me down because I can pull myself down. This is because we assume people have already noticed our ‘flaws’ and are thinking about them. Admitting to these flaws give us a sense of power over the situation as if saying ‘don’t worry I know,’ makes us look cooler. Of course some people would say that when we pull ourselves down in front of others we are simply fishing for compliments. Maybe there is some truth in that. Aren’t we all secretly hopeful of compliments? After all when we post photos of ourselves on social media what are we doing if not seeking approval?

I’ve spoke about this issue of negative body talk between peers before. It seems to be something women bond over. I try my best not to do it, encourage it or get sucked into it but boy it’s hard!

This is the first time my negative body talk has been shut down for being stupid. My male friend didn’t shower me with any compliments to make me feel better. He didn’t sympathise with me like a female friend perhaps would have. He didn’t tell me to get over myself. He simply said it was stupid.  Not that I was stupid, but that such nitpicking at myself was stupid.

You know what? I think he’s right.