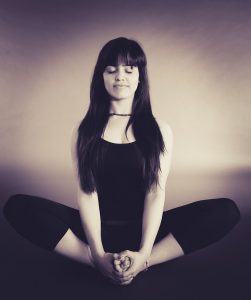 It’s that time of year again when nasty coughs, colds and bugs start to plague everyone around us. You decide to buy a bottle of hand sanitising gel for safety and start hiding your face behind a scarf on public transport! Being ill makes you feel rotten, fact. But there is one thing I fear more than any of the awful symptoms of being poorly and that is being “too busy to be ill.” Being ill slows you down. It can feel like walking through treacle trying to get anything done. Sometimes it simply stops you in your tracks. I don’t know about anyone else but I really struggle to admit defeat! Taking a day off work or cancelling plans is always the very last resort. But why? The guilt monster, that’s why!

Guilt doesn’t only rear its ugly head when we’re unwell; it pops up all the time. Every week at least one person will message me to say they can’t get to a class. Of course sometimes it’s because they are poorly but a lot of the time it’s because something else has cropped up. Unfortunately people have busy lives, I get it! Sometimes they have to work late, sometimes they don’t have childcare and sometimes it’s an appointment or a special occasion. Whatever the reason, I can always hear the same guilty tone in every message. I can tell that they genuinely feel bad about having to miss their weekly dose of exercise.

On the flip side, I know that so many women feel guilty when they do come to class.

They’ve had to leave their children at home.

‘Me time’ can be a big trigger for guilt. Taking time out to do something just for you can feel selfish no matter how important you know it is.

I think it’s fair to say that we live in a health-conscious society. Our actions might not always show it, but we know we should be looking after ourselves for our health and overall well being. It’s very easy to end up in a catch 22 situation where you feel guilty for not taking better care of yourself but then guilty when you do because it’s taking your time away from something else!

So how do we ditch the guilt?

I for one don’t think I’m the type of person that will ever feel guiltless when it comes to finding the balance between work, play and rest. I do think I have started to make small progress steps though. I’m simply trying to listen to my body more. For example, a few weeks ago I made the decision to have a deep tissue sports massage to help with tension in my shoulders. If I’m tired I’ll take a 15 minute power nap. When I look at my work load I’m trying to prioritise things rather than just cram as much as I can into one day.

I don’t feel as guilty about taking time out if I focus on the positive impact it will have on my work. It also has a positive impact on the relationships I have with other people as I’m a happier Helen to be around!