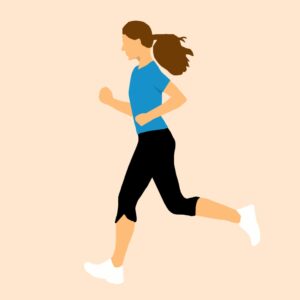 Saturday the 4th of July. Another Saturday with no plans. My 15th Saturday spent in lockdown and I still wasn’t used to this slower pace of weekend.

The weather had been disappointing all week and I was getting cabin fever. I was also feeling very sloth-like after a week of very little exercise. It got to 3pm and I thought, “Right, I’ve got to move myself.”

Now, this is not something I do regularly, not at all. I’m definitely not a runner. But I’d successfully managed the 5k ‘Run for Heroes’ challenge back in April after being nominated to do it. I would go as far as saying I enjoyed doing it too. So, with over 2 months having passed since the 5k, I was feeling ready to give running another try.

My husband politely declined my offer for him to join me.

So, with nothing on my person, off I went (I do not own a bum bag, a phone armband, nor was I wearing anything with pockets).

It felt quite nice heading out of the house and leaving my phone behind.

I’d not even got to the end of the road before a neighbour jokingly shouted after me, “Do you need a lift?”

One thing you don’t want to do when you are running is speak to anyone. But because I wasn’t running that fast, I felt obliged to say “hi” to anyone I passed for fear of looking rude if I didn’t, trying my best to not sound too out of breath.

Not long into the run I started questioning my choice to bring nothing with me. I began to worry about having left my phone at home and having not brought a drink. I began concocting imaginary scenarios in my head –

What if I fall over and hurt myself really badly?

How will I make it back home if I get injured?

How will I get help if I can’t call anybody?

What if it gets hotter and I get really thirsty?

What if I somehow take a wrong turn and get lost?

I was so preoccupied with these ridiculous thoughts of what could befall me on a 30-minute jog around my home village that I hadn’t realised I’d somehow made it to the halfway point without stopping. Go me!

The last time I had attempted running the same route with my husband (a practice run for the 5k ‘Run for Heroes’ challenge) I’d had to stop 5 minutes in. I remember watching him get smaller and smaller as he ran on while I stood still gasping for air. My chest was burning and my legs were like lead.

Now, I’m a big advocate of having a fitness buddy you can workout with who can motivate you and support you.

However, trying to keep up with my husband in my fiercely competitive manner did not prove a recipe for success. Instead of trying to go at my own pace, I was trying to go at his. He kept running on ahead, then turning around to see where I was, then sometimes he would stop and wait for me if I’d fallen too far behind.

Despite his sweet intentions, this did nothing for my self-esteem and in my eyes only seemed to highlight how slow I was going/how unfit I’d suddenly become during lockdown. I kept pushing myself to try and catch up with him which only exhausted me further.

Running on my own proved much better and I easily settled into a pace I was comfortable with and could sustain.

With this new found endurance I ploughed on, even trying to go a bit faster as I passed other people wondering if I could actually pass for a ‘proper runner.’ I was enjoying the fresh air now and the anticipation of the sense of achievement I was going to feel at the end of the run.

As the endorphins started to wash over me, so did the rain. The sunshine vanished in a cruel magic trick and a dark grey sky set in which looked even darker through my prescription sunglasses. Said sunglasses started to slide down my nose as they got wet, naturally being heavier than my normal glasses. Let me tell you, trying to clean my rain-splattered jam jar bottom lenses with my sleeve, whilst running, was no easy feat.

On a positive note, during the periods when I didn’t have my glasses on, everything was a blur which gave me the illusion of going much faster than I was!

Despite the rain, I was now sweating profusely underneath my hoodie. It had become decidedly muggier since the sun had disappeared. I’d managed cleaning my glasses whilst running but was unsure of my ability to take my hoodie off whilst running. I didn’t dare stop for fear of breaking my flow. So, I carried on running with my hoodie on as the beads of sweat started to trickle down my forehead.

As I was approaching the home straight, I received a honk from a car. Don’t judge me, but I felt rather flattered instead of disgusted.

No, it wasn’t someone I knew (as my friend had suggested it might have been *eye roll*) and yes, I’m aware that the fact I was flattered by a driver honking me probably sums up everything that is wrong with our image-obsessed society. Not to mention it’s not a very feminist reaction. But still, I couldn’t help but think to myself, “You’re smashing this run Helen. Feeling good and apparently looking good!”

When I got in 10 minutes later and saw myself in the mirror, hair plastered to my head with sweat, I wondered if it had been less of a wolf-whistle type honk and more of a “HAHA, LOOK AT HER!” type honk.

Nevertheless, I’d done it. I’d completed the run without too much difficulty and without stopping. Yesssss. My legs were like jelly. I headed out into the garden to cool down and have a stretch.

I’ve now completed 3 runs during lockdown. So, what do I make of running?

– Being outside in the fresh air (it makes you feel good).
– A chance to take in and enjoy your local surroundings (if you have nice surroundings nearby).
– The peace and quiet (obviously only applies if you run somewhere peaceful and quiet and don’t run with anyone else or whilst listening to music).
– Runner’s high (this is definitely a thing).

– The Great British weather (need I say anymore).
– Time alone with your thoughts (as an over thinker – I don’t need any more time with my thoughts. I need escapism!).
– It’s nice but a bit monotonous (running reminds me of swimming).
– You have to carry everything you want to take with you (if you’re not wearing it/it’s not strapped to you, it’s stopping at home).

All in all, I give running a 3.5 out of 5. For me personally, it’s nice for a change, but I don’t know if I could do it all the time in all weathers. I find it enjoyable but dancing is just more fun!