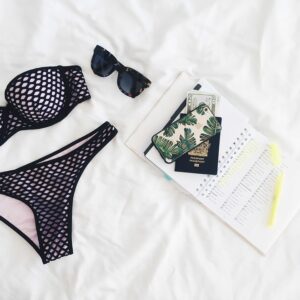 Many of us have been left without a holiday this year. It’s a bitter pill to swallow but what can you do?

To cheer up anyone who has had their summer holiday cancelled like me, here’s my most embarrassing holiday story ever.

Close family and friends will have heard this fateful tale before but may like to revel in my humiliation one more time!

The hotel we were staying at had its own small water park and one day we decided to spend an afternoon there.

Now, despite being quite a confident swimmer and a bath lover, I’ve had some bad experiences in water. I recall a trip to the local swimming baths at the age of 10. I was peer pressured into going on the big water slide and found myself struggling to swim back to the surface under the weight of the water being spat out from the slide itself. I also recall another incident where a ‘friend’ tried to trap me underneath a water float.

Nevertheless, I didn’t feel too apprehensive on that sunny afternoon in the water park. None of the slides looked too daunting and the water was shallow. Small children were enjoying even the tallest flume so I took this as a comforting sign of safety.

Instead of sunbathing on the side-lines with my mum-in-law-to-be, I decided to be adventurous and try the slide and flumes out with my other half and his brother. I eased myself in with a few goes on the tamest slide there, a gentle wavy one – not too steep, not too fast.

I quickly began to feel more confident and heard myself suggesting we venture on to the flumes.

With a few butterflies, I tried out 2 medium height ones with a few twists and turns. I survived them both and quite enjoyed them!

It wasn’t long before the three of us were making our way up the steps to the tallest flume, one which resembled a coiled spring. When we got to the top, the butterflies returned as I heard the gushing water and realised just how high we were. Starting to feel slightly regretful of my decision to try it, I volunteered to go first to get the experience out of the way.

As soon as I set off down the flume, I knew I’d made a terrible mistake.

To my alarm, the flume was much faster than the others and I seemed to whip around the turns at top speed. My coccyx hit every tiny ridge of the flumes connecting parts on the way down, creating a friction burn effect.  I seemed to be picking up speed all the way down as I anxiously gripped my nose waiting for my departure into the pool.

Without warning I hit the water, sinking like a lead weight.

I didn’t bob back up to the surface straight away like I had witnessed everyone else do. Eyes blinking and vision blurry, I attempted to swim to the top. No such luck. In a moment of complete confusion and disorientation, I wondered if this was somehow part of the flume and I was still on it. I couldn’t feel the bottom of the pool and I couldn’t get to the top. I seemed to just be floating helplessly underwater.

All of a sudden, I felt an arm underneath my back. I thought it was my other half coming to save me (of course he was still stood at the top of the flume waiting his turn).

I was thrust into the air in a Lion King style moment.

I quickly realised I was in the arms of a lifeguard. “ARE YOU OKAY?!” he yelled. In that moment, overcome by shocked, I girlishly tried to giggle and blurted out something about being too light (thinking back to the big water slide incident some 15 years ago) “DON’T WORRY, IT HAPPENS ALL THE TIME!” (not disconcerting at all).

I was safely lowered back into the water and stood myself up. I began to make my way gingerly towards a blurry couple who I could just about make out to be my other half’s mum and dad. It might be important to tell you at this point in the story that I did not have my glasses on, and no, I do not wear contacts. With my blurred vision and the dizziness I’d acquired from coming down the super twisty flume, it’s no wonder I couldn’t make out what my mum-in-law to be was gesturing at me. She was flapping her arms up and down in what I initially thought was panic at the whole me nearly drowning incident. As I got closer to the steps to get out of the pool, I realised she was motioning for me to pull my bikini top up.

I looked down and there it was – one boob out on display looking as startled as I felt.

I quickly hoisted my top up and scrambled out of the pool shaking with shock.

It turned out I hadn’t got stuck underneath the weight of water from the flume. I’d shot out of the flume like a pencil and had entered the water horizontally. Whilst I thought I was vertical in the pool trying to swim upwards, I was actually laid on my back horizontally under the water. No wonder my breaststrokes had done nothing to get me to the surface. I must have gotten so disorientated with a) not having my glasses on and b) all the twists and turns of the flume.

The whole episode could have fallen straight out of a teen fiction book. A mortifying yet hilarious account from the diary of a 14-year girl – cringe!

When my other half and his brother appeared after coming down the flume themselves, they were baffled to say the least.

“What happened?!” they said. Very sympathetic!

It turned out they’d been stood at the top wondering what was taking so long and then the whistle was blown. Apparently, the conversation went something like –

“Oh, someone’s got into trouble in the water.”

I haven’t stepped foot in a water park since that day. I don’t think you could pay me to go down a water slide or flume now.

The moral of the story is think twice before going on flumes if you have poor vision and there’s a chance you might get disorientated. Oh, and always invest in sturdy swimwear.