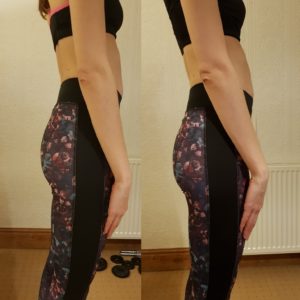 Back in January I made the decision to start using weights for the first time. I wanted to see what all the fuss was about surrounding weight workouts. Could I really build a bum as bootylicious as Beyonce? Could I find love for a workout that didn’t involve any type of dancing?!

I published a blog post at the time detailing what I set out to do and why which you can read here in case you missed it.

Now it’s time for my follow up post filling you in on the progress I’ve made. The photo above shows my before photo on the left and my after photo on the right 9 weeks later.

Did the gains begin?…

Here is a reminder of what I set out to do in January:

3 workouts a week alternating between Workout A and Workout B –

Goblet squats (squats with a dumbbell held to your chest)

Hip bridges (laying down raising hips off the floor with a dumbbell laid across the hip bones, hands stabilising the dumbbell)

3 sets of 20 reps for each exercise with a one minute rest in between sets.

Reverse lunges (lunges stepping backwards with a dumbbell held in each hand, arms down by the side of the body)

3 sets of 10 reps on each leg with a one minute rest in between sets.

3 sets of 20 reps with a one minute rest in between sets.

Walking lunges (lunges travelling forwards with a dumbbell held in each hand, arms down by the side of the body)

Split squats (a squat on one leg with the rear foot elevated on a bench, dumbbell held in each hand, arms by the side of the body)

3 sets of 10 reps on each leg for each exercise with a one minute rest in between sets.

I decided I would begin by using dumbbells weighing 3 and a 1/2 kg and for exercises requiring one dumbbell the plan was to use 6kg. I decided if the weights were too heavy, I would perform the exercises with lighter weights or without weights at all, only adding weight when I felt comfortable.

I will admit straight away that I did not track my progress like I should have done! A simple record of what weight I used and how many sets and reps I did each time would have sufficed but I didn’t even do that!

It quickly became apparent that fitting 3 weight workouts into my weekly schedule was going to be hard work.

I was tired after classes. I have a late finish most evenings so pushing myself to set the weights up and attempt the workout seemed time consuming enough without writing down what I had done after! I was so eager to just get the workouts done.

When I did find I was ready to add weight along the way I was so happy I forgot to record the achievement!

So, let’s just say my approach hasn’t been very methodical! I’ve really just gone with how I felt, doing what I could when and trying my best. I tried not to put too much pressure on myself.

How did I find the process?

As you will see it turned out I couldn’t manage the weights I’d originally planned on using in all the exercises. When I discovered this I became instantly frustrated.

When I struggled with my form during the exercises and my husband tried to offer advice I would snap at him with phrases such as, “That is what I’m trying to do!!!” and “Look I’m trying my best!”

Let’s face it, there is nothing more annoying than finding something difficult especially when you really want to do it. I’m sure many people will have had similar feelings at Dance Fit when trying to copy the moves and grasp the routines!

Getting disheartened is a knee-jerk reaction when something is hard.

In those moments where I had to stop because my legs were shaking or I lost balance or I knew my form had gone to pot, it was so hard to imagine it ever getting easier.

I wouldn’t say I ever thought about quitting in those first weeks but I did kick myself because I felt like I was making slow progress. I wished I could do a workout every night to speed things up but there was no way my body could handle that and I know how important rest days are. And boy did I need those rest days in the beginning!

Just walking down the stairs after those first workouts brought levels of pain I hadn’t previously experienced!

Now, the delayed onset muscle soreness has calmed down. I just ache after I’ve added weight but that’s normal.

It’s so funny to think I thought I was making slow progress when I look back at the progress I’ve made now.

Getting into a routine

Another thing I struggled with was getting into a routine of when I would do the workouts. What would seem like a good idea would then seem near impossible when trying to put in to practice!

There were a couple of weeks where I only managed 2 workouts. One week I had to miss completely due to a nasty sickness bug (hence why this follow up blog post is a week later than I said it would be!)

It has taken me the full 9 weeks to get into a routine and for it to become a habit. I have now settled on Tuesday evenings after Dance Fit, Friday evenings when I have the earliest finish and one weekend workout.

All throughout the 9 weeks I have kept constantly changing my mind. One day I would look at myself and think I could see change. The next day I would look again and decide I just looked the same as before I started using the weights.

Of course, it’s important to remember 9 weeks is not a big enough period of time to see drastic change!

At the end of the 9 weeks I have decided that my bum has lifted slightly and looks perkier. I also think my legs look stronger.

However, the before and after photos don’t really show much change at all. This begs the question am I just seeing what I want to see?…

But I ask myself, does it really matter? I now feel more body confident than I did 9 weeks ago. Isn’t that the real gain? There’s no denying I’m definitely stronger too.

Exercise really can change the way you think and feel about your body.

I will be sticking to using the weights and I’m excited to see what further progress I can make.